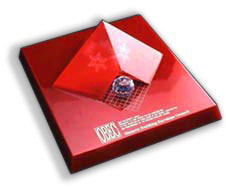 Anthony A. Woods Award (The Beckie)

This Award, previously called the President’s Award, is given biannually to recognize individuals who have made a significant contribution to the design, construction and performance of the building envelope. This is a career achievement award and is not based on a single contribution. This is the Council’s premier Award, named in honour of Tony Woods, who first created the award and gave it its nickname, “The Beckie”.

The President's Award began with Tony Woods, OBEC President in 1991. He realized that our 'industry' - of research, design, construction, and rehabilitation of the building envelope - did not have a way to recognize the contribution of its members. A way was needed to recognize excellence. It should be available to all members of the industry: researchers, academics, consultants, contractors, manufacturers. To such people a gift, an award, should be given to honour their contribution to the promotion of excellence in the design, construction and performance of the building envelope. The award should be unique as the act of the bestowal, symbolic of what we strive to achieve, and have intrinsic value.

The form of the award was developed in a few short months before the first President's Award Dinner in 1991. Various people of note were consulted for ideas, including Gus Handegord, Rick Quirouette, Bill Brown, Grant Wilson. The Ontario College of Art was approached and a students came up with various concepts for awards. Carson Woods, architect and brother of Tony Woods, put pencil to paper and gave form to the various ideas collected and contributed more. Rollo Myers of Topographics Ltd., an architectural model maker, suggested materials for the award, which lead to David Plummer at Clearmount Plastics, a specialist award manufacturer, who gave shape and substance to the award. The final product, is a blend of chance and circumstance, rich in symbolism, and remains unique in our industry.

The name “Beckie” was initially proposed by Tony Woods in 1991 while sitting outside a lecture theatre at the University of Toronto School of Architecture with Jerry Genge and Dale Kerr (both also Beckie award winners).  While the official name was the President's Award, a shortened version of the “President's Award of Excellence”, the name “Beckie” gain full support from OBEC members.  On Tony’s passing, and in recognition of Tony’s exemplary support for OBEC and Building Envelope design and construction, Jerry Genge, OBEC’s President in 1988-1989 and 2009-2011 proposed that the Beckie’s formal name be changed from “The President’s Award of Excellence” to the “Anthony A. Woods Award of Excellence”.   The Beckie has been conferred on building science pioneers and industry leaders.  Each express how they cherished the honour of being listed amongst the august group of prior recipients.

Pyramid: symbolic of the oldest form of structure, the tent, and one of the most durable, the pyramids.

Recess in the pyramid: symbolic of shelter, protecting the facetted crystal ball from the weather.

Red base: symbolic of the solid foundation needed for all durable construction. It also turns the pyramid red, symbolic of warmth (this is, after all, an award from a group in a cold climate country!)

Crystal ball: symbolic of many things, hence the facetted surface: of us, of our possessions, the most valuable of which being our history, stored where it can be protected by the weather, within the pyramid recess.

Snowflakes: symbolic of exactness, of sophisticated engineering, to which we aspire in our designs for the built form. Also of the weather from which we seek shelter: snow in the winter, rain in the summer (when viewed from the side).

Acrylic plastic: symbolic of modern materials of construction. The plastic forming the pyramid is also clear, symbolic of the desire to let light into our buildings.